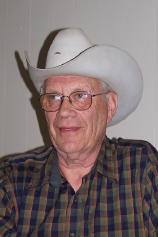 Working In Corridors: Heeding - Part 2 of 3
Ron Meredith
Heeding is a horse communication system that proceeds in small, horse-logical steps that never create fear or antagonism in the horse. It requires being consistent in the moves you make around the horse, introducing just one small bite of information at a time, and making sure that new information is just one step away from what the horse already understands. Heeding builds a solid foundation that the horse and trainer can use to play reining or show jumping or dressage or any other game they decide to play.

In a relationship with a horse, the best place to start is at a distance. So last time we talked about how you start the heeding relationship at a distance. You turn the horse loose in an arena and just "play" by following him in a way that builds his confidence that you are not an attacker. You establish an imaginary line running through your shoulders and the horse's shoulders and consistently keep your body facing in the same direction as the horse.

The horse begins to associate that posture with the freedom to move forward. When you step behind this line, you put pressure on the horse to move forward. If you step ahead of this line, you restrict him a little. As you and your horse get to playing together and paying more attention to one another, you can eventually use these actions to encourage the horse to turn another direction or change speed. For example, you can step ahead of the shoulder line, turn, and ask the horse for a turn.

But in the beginning, you just play and wait until the horse stops to signal he accepts you and wants to approach. When he does, you turn your shoulders parallel to the horse's body and start making friends by scratching and "grooming" him from his chest up to his favorite places. The horse begins to associate that shoulder position with standing still and relaxing.

After grooming, you snap a lead rope on his halter, and you change the game a little. You start asking the horse to follow you, literally step by step. In the beginning, you want to match your steps to the horse's steps. When he picks up his right fore foot, you pick up your right foot. When he moves his left, you move yours. Take a look at how your horse is standing. The front foot that's a little behind is most likely the one he'll pick up first when you ask him to move off with you.

The reason for matching the horse's footfalls is because everybody starts out trying to develop a language with the horse by telling it a hundred things to do. That doesn't work. In the beginning, you match exactly what the horse is doing. Eventually, the horse understands that matching strides is the game. Then you can change the game a little again and start asking him to match exactly what you are doing.

The first time, you kind of move him over along the wall quietly then stop and scratch him. Then you obviously turn from facing toward him to facing with him in the same direction. You start to walk, anticipating which foot the horse is going to move first. Just as you start to walk, you reach back with the whip and encourage him with a little rustle or shake to go forward. He can see your feet move in his peripheral vision, he can hear the rustle behind him, and he can see it's open in front of him. It's an easy decision to step forward. Now you are "leading" the horse, not just physically but mentally.

When you start teaching your horse to heed, you walk along the wall of an arena. The wall creates one side of a corridor while you, with the lead rope in your hand and a whip sticking behind you, are the other wall. The "walls" create a shape the horse can feel. A methodical corridor of pressures creates shapes the horse will understand.

You walk down the wall and as you approach the end of the arena, the horse will think the corridor is blocked. To turn, you turn the line running through your shoulders and the horse's shoulders. You don't pull the head over because if you pull on the lead, you teach the horse to lean on the lead. And if you teach him to lean on the lead, he will always think that he can lean on any aid you put on. So as you reach the end of the arena, you have to fall back a tiny bit, turning your shoulders away from the horse so that you open up one side of the corridor. Now you can bring him around the end and show him that the corridor bends. You do the same thing on the next wall.

If you have a situation where he wants to run off in front of you or you are having trouble getting him to stop, don't yank on the lead. Walk straight into the arena corner to stop him. Give him lots of scratching and loving to let him know that halting was the right answer. Then make a turn, go across to the next wall and do the same thing. Before you know it, you will be able to stop before you get into the corner and he will stop with you. The control is being transferred to you.

Heeding gets the relationship between you and your horse to the point where you can communicate exactly where you want each step and how long the stride should be. That is where real control comes from. Once you have the horse working in a horse-logical corridor of physical pressures on the ground, you'll change the game again and ask him to work in a corridors of pressures (aids) created by a rider sitting on his back. The more methodical you are about the kinds of moves you use the easier it is to get the horse in the habit of paying attention to you. And the more accurately you can speak this language, the more relaxed and calm the horse will be.