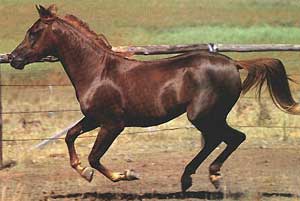 Training Mythunderstandings - Using Pressures To Shape The Horse
Ron Meredith
Training horses involves using pressures to shape a horse's behavior. But many people MythUnderstand how to use pressures properly.

Horses will learn when:

• a pressure is not perceived as an attack,
• the pressure is only one step away from something the horse already understands, and
• if doing the correct thing relieves the pressure which rewards the horse.

When all three of these things are in place, then the pressure will be "horse logical." The horse will accept it calmly and learn from it.

Many trainers attack horses. They think that if the horse's activity level or excitement level increases, the horse is learning more. That's one of the biggest MythUnderstandings there is in the training world. In fact, the truth is just the opposite.

When most people come to the end of their knowledge of how to enforce training positively, they often resort to avoidance pressures. Yank that lead shank. Pop him with the end of the rope. Jab him with those spurs. Those actions all create a high level of activity in the horse because the horse feels he's being attacked by a predator. Do you want that horse to react to you like a prey animal or a partner?

Have you ever noticed how people talk to someone who doesn't speak English well? The first thing you know, they're talking louder. The problem isn't that the other person can't hear. It's that they don't understand the language. So you cannot be louder with your aids or pressures to achieve the desired result with your horse.

Many people don't know how to link the things a horse needs to learn up in a logical sequence or how to break training down into many small building blocks the horse can learn one by one. They put pressure on the horse to do something, to create a particular shape, before the horse understands all the baby steps he needs to get him to the point of understanding. Then when the horse doesn't "get it," they "swear" at him.

Swear pressures elevate a horse's excitement levels. What are swear pressures? Whenever anyone runs out of language, they swear. It's a cheap shot out of nowhere. But a person with a command of the language can make a number of meaningful points without ever swearing. Swear pressures do not make your point. The only thing they do is disrupt communications.

To communicate with the horse, you must make the shape you want understandable. You need to use the right language. You will see a lot of people slap a horse when they want it to move or go faster. As a training pressure, a slap has a definite "start" but the "stop" is right there with it, too. So what does the slap tell the horse to do? There is no way for a slap to do anything but elevate the horse's excitement level. The horse will not be going the specific amount faster you wanted or moving in exactly the way that you wanted.

How quickly you apply a pressure, where you apply it and how hard you hold it tells the horse how he needs to respond. And as soon as he responds, you reward by taking the pressure away. The greatest reward to a horse is the release of pressure. Always. So you apply pressure in a horse logical way that causes the horse to act the way you want, and then you release the pressure as a reward. Then you do it again until the horse's response to that pressure becomes a habit.

Some horses will tend to lean into your pressures when you apply them and in order to create an understandable shape at that time, you must keep the pressure there until the horse moves in relation to it. For example, if you are on the ground trying to get a horse that is leaning into your pressure to move away from you, you have to push only the amount that you can comfortably hold until the horse gets tired of it. If the pressure of the flat of your hand or the front of your knuckles doesn't have any effect, use the butt end of a whip or poke with a finger or two to concentrate the pressure on a smaller area and make it more noticeable. If you take the pressure away before the horse gets tired of it, the horse learns that all it has to do is wait and you'll quit. You hold the pressure until the horse decides to move away from it. And you have to be certain that you don't get impatient and smack the horse in the belly and ruin everything it was understanding up to that point. Give the horse time to learn. Then reward it.

The timing of a pressure can be important to learning. Take this statement: "Woman without her man is lost." Now change the punctuation. "Woman. Without her, man is lost." The words are the same but the way they are timed creates an entirely different meaning. Aids are the same way to the horse. It's the timing, the punctuation, of our aid pressures that often counts, not the strength or force of them.

Aid pressures must be balanced in order to create a training corridor for the horse to move in. A horse has a one track mind. Anything will distract him and when it does, he's gone. He's out to lunch. You see people distracting their horse with badly applied aid pressures all the time. They only use one aid or pressure too loudly out of all the aids it takes to communicate an understandable shape to the horse. That distracts the horse from all the other aids that could give him a clue about what to do and he misses the meaning of the communication. Bits are the biggest problem here.

When you communicate horse logically using methodically applied directional pressures that shape rather than attack the horse, you are training, not breaking. Punishment has no place in a training program. When a horse does something "wrong," that happened because you taught the horse to do it or you allowed the horse to do it. Punish yourself, not the horse.