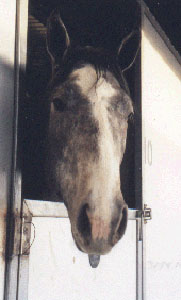 Aids Versus Cues
Ron Meredith
There's a lot of talk about aids and cues in the horse world and a lot of it just confuses people. One trainer talks about using your legs as aids and another one tells you to cue your horse with your leg. Neither one probably knows what he's talking about. So it's no wonder horses get confused.

Horses don't care what a trainer calls the things he or she does, they just need to understand them in a horse logical way. As a training method, heeding uses methodically applied directional pressures to create shapes. Pressures that create shapes are called aids. Once the horse understands what shape you want when you apply a particular pressure, you can associate a cue or signal with that shape. So now you can use that cue to tell the horse exactly when you want him to give you the shape. You teach with aids. You ask with cues.

Notice what goes into an aid. It's a pressure. It's applied so it indicates the direction you want the horse to go. And it is applied methodically and consistently. That's not the same as forcefully or insistently or repeatedly. A lot of people use swear pressures instead of aids. Instead of touching the horse with a whip or even just pointing it at him the right way, they slap him with it. Loud swear pressures get a reaction from the horse but they don't teach shapes.

If you're coming too fast or he's a spooky kind of horse, he may move off and ask questions later. If it's open in front of him, that's the direction he'll go. If it's not, he'll turn in whatever direction he feels he has an opening. Once he's far enough away to feel safe from what might be a predator, he'll turn to take a good look and figure out what's coming. (TRUE? IS THIS CORRECT HORSE LOGIC?) Those are horse logical responses to the pressure you put on the horse as you approached him from behind.

Cues are conditioned responses that are not necessarily horse logical. Cues are supported by rewards. You use a pressure to create the shape you want. You give the horse the cue as soon as he creates the shape. Then you reward him with scratching or something else he likes to tell him that was what you wanted. Eventually you can stop using the aid because as soon as the horse gets the cue, he gives you the shape and looks for his reward.

Once the horse understands that a particular cue indicates a shape you want, you don't need to use the aid to get that shape. Conditioning the horse to respond to cues instead of just to aids is kind of like putting an automatic transmission on a sports car. Now anyone can drive it. A cue is something a trainer can sell with the horse. The owner can ride it and cue it and doesn't have to understand all this stuff about aids to get the shapes he wants to play people games on horseback.

When you put cues on a horse, you've got to monitor the horse's response to those cues. When the horse starts to ignore the cue, you need to drop back to the aid that was used to teach the shape you wanted in the first place and remind him of the relationship between the cue and the shape. Retraining horses to respond to cues is what helps keep trainers in business.