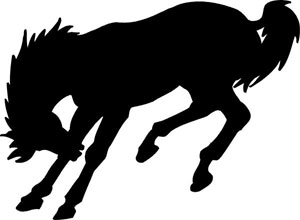 Riding the Better Side of Bucking
Ron Meredith, President, Meredith Manor International Equestrian Centre
Bucking is a mythunderstood horse activity. Most people look at bucking as an ornery habit, something the horse does when he's trying to get out of work. Or when he just doesn't feel like cooperating at that moment for some reason or another. However, if you think about bucking as an activity drive that you can channel into behaviors you want instead of behaviors you don't want, then it's not necessarily a bad thing.

From the horse's perspective, bucking is usually a defense mechanism. The horse feels a degree of pressure he perceives as an attack or some sort of annoyance. The horse may feel bothered physically or mentally. It really doesn't matter because he'll react the same either way. When a horse feels threatened in front of the secondary line of influence that runs through his shoulders, he'll bring his head up, shift his weight back and either strike out with his front feet or spin and run away. When he feels bothered from behind his secondary line, his natural response is to drop his head and kick out behind. In other words, he bucks.

The horse will buck to the degree he feels he needs to buck in order to relieve whatever degree of attack or harassment pressure he's feeling at the time. In the old days, people "broke" green horses by fighting with them and riding through all their bucking until all their activity drive was spent and the horse was so tired he couldn't fight any more. The horse was supposed to learn that bucking didn't work to relieve the attack pressures he felt when a rider got on his back. Breaking is about teaching the horse what not to do.

If a horse bucks to relieve a pressure he feels and he succeeds in tossing his rider, the horse gets rewarded for bucking because the pressure goes away. When we go to train a horse rather than to break him, we still need to be sure we can ride through whatever he does so that he doesn't find bucking rewarding. However, we recognize that it takes a really athletic horse to buck and we want to harness that athletic activity drive and turn it into something useful. We don't try to ride through the bucking until we use up all his activity drive.

When we train horses rather than breaking them, we want teach them what to do rather than what not to do. So instead of looking at bucking as some kind of disobedience or orneriness we don't want any part of, we look at bucking as just another dynamic, athletic movement like jumping a high fence or doing a sliding stop. Instead of thinking about how to discourage it, we want to develop control over it so we can ask for that kind of dynamic activity whenever we want it.

When a horse goes to buck, he tries to put his head down so he can shift his weight onto his front end. If he succeeds in doing that, then he can focus on releasing a big burst of energy drive out through his hind end. This all happens in a second or two and for that second or two, the horse's forward motion ceases. So before he actually gets a buck off, the horse gives us three warning signals, or three chances, to capture the energy he wants to put into bucking and redirect it somewhere else.

So as soon as you feel the horse starting to duck his head and shift his weight onto his forehand, you squeeze the horse with your legs to ask him to keep moving forward in the same rhythm as before. If you missed his first signal and you start to feel his forward energy slowing down and moving backward, you squeeze with your legs and ask him to keep moving forward in the same rhythm. Let's say you were really not paying attention and you missed those first two signals. Now the horse's forward motion has stopped completely and he's just on the verge of blasting a kick to the rear. The solution is still the same. Squeeze the horse forward with both legs in the same squeeze and release rhythm you were riding before the two of you got distracted.

Of course, you're riding the horse with a full corridor of aids, not just your legs. So you're still following the motion of the horse's head with your hands with just enough of a momentary added pressure to ask him not to put his head down for that weight shift. Your stomach and back stay soft, following the horse's motion. You continue to rhythmically drive with your corridor of aids, relax and allow the stride, then drive, relax, drive, relax, etc., etc.

As you and the horse discuss just whether his activity drive should be focused forward or backward, you may feel like you're riding a rocking horse for a stride or two. Remember that a rocking chair doesn't keeping rocking unless you keep it rocking. When a horse starts to buck, a lot of people try to stop the movement of his head. Don't freeze the motion of your hands or pull back. Allow forward motion with your hands and keep your back and seat relaxed. If you tighten up, you become a spring that the horse's exaggerated motion will bounce right out of the saddle.

Some people advise that if a horse likes to buck when he's fresh out of his stall, you should put him in a round pen or on the end of a longe line and let him spend some of that activity drive before you start to ride. Whether or not that's a good idea depends on your goals. That may be the safest course of action for the recreational rider who doesn't have an independent seat or doesn't have the skill to coordinate a full corridor of aids and who doesn't really want or need l00 percent of what the horse can offer athletically. The rider who wants to compete at the upper levels of a sport, however, wants to keep and channel every bit of that activity drive into the horse's performance.

Now there are some horses that buck for reasons other than feeling attacked or harassed. Occasionally a horse may buck because something about his tack is causing pain that he's trying to escape. With older horses, bucking can sometimes become a game. Horses love games as much as people do. We had a horse named Punk here at Meredith Manor, for instance, who enjoyed showing riders who was really in charge. If a rider who wasn't really solid yet got after him too much, he'd buck just enough to get them loose and scared. Then, at the last second, he'd scoot under them, put them back in the saddle, and save them from total humiliation. The riders quickly got his point about who was bossing who.

If you've got a horse that bucks and you don't have the skills ride him through it, get help from a competent riding instructor until you are confident that you can. When the bucking no longer offers your horse any reward, he'll likely give it up and you'll wonder what the problem ever was.